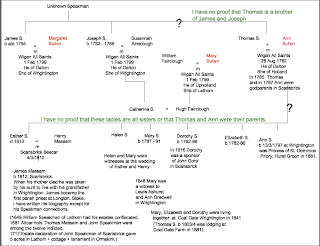 The PDF (guessed Speakman connections) of the tree above can be downloaded from box.net on the right.

Dear Barbara,
Please could you help me or point me in the direction of someone who knows a lot about the Wrightington / Speakmans.
I am looking for the family of Esther Speakman. She married Henry Massam on 4th March 1810, in Scarisbrick with witnesses Henry Dobson, Mary Speakman and Helen Speakman. I know that Esther died in 1813, and her infant son James Massam was taken by an aunt to live with his grandfather (Speakman) in Wrightington. The source did not specify whether the aunt was married or was an aunt by marriage.
I speculate that Esther's parents were Thomas and Ann Speakman and that Esther had sisters Mary (born 1787 - 1791), Elizabeth (born 1782 - 1786) and Dorothy (born 1792 - 1796) so I am searching for birth records of Esther and these ladies - but in spite of scanning many church registers I have not found a record of their births.
Reasons for the speculation:

1. Thomas and Ann were active as godparents in the RC parish of Scarisbrick (1785 - 1787) at a time which would correspond to them being a young married couple at the guessed time of Esther' birth and in the years just before the births of Mary Elizabeth and Dorothy.

2. Mary Elizabeth and Dorothy Speakman were living together at Wrightington Coal Gate in the 1841 census.

3. On 26 Aug 1782, a Thomas Speakman of Dalton married Ann Bullen of Holland at Wigan All Saints (Maybe a repeat marriage following a private RC marriage?).

4. There was a large Bullen family in Scarisbrick.

Another possible connection: Esther's son James Massam became an RC priest and was the first parish priest of Longton near Stoke. Was his vocation influenced by a relative? The 1861 census records Ann Speakman, born in Wrightington 1796/7 as Prioress of St. Dominice priory at Hurst Green. The Dominican records say "Professed at Hartbury Court May 6 1829 Sister Ann Mary Luisa Speakman born 13 March 1797".
Thanks for any help you can give and I hope they fit in with your Speakmans.
Tom Massam, of Scarisbrick. (Cousin of Andrew Scarisbrick).

Hi Barbara
Long time since we've spoken. I hope you are keeping ok.
And Hi Tom... talk about small world. I don't have anything definite to add, but the speculation does seem logical. Plus I maybe have another coincidence in this.
There was another marriage at Wigan All Saints, 1st Feb 1779, between James Speakman of Dalton and Margaret Bullen "of Rightington" (their spelling). Possibly two Speakman brothers marrying two Bullen sisters?
Regards for now,
Andrew

Hi Barbara
Not to confuse you too much, Tom, but I have found another Bullen marriage at Wigan, All Saints, that may interest you. On the7th of March 1791, William Fairclough of Upholland married Mary Bullen of Lathom, witnesses Robt Bullen and John Holt. Their children were baptised at St. James RC, Upholland/Orrell. Their son, Hugh, married Catherine Speakman, daughter of Joseph Speakman and Susannah Ainscough, and Veronica may be interested in these Faircloughs!
Andrew