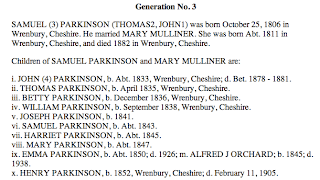 Many thanks to David Wilson (david_wilson2@btconnect.com) for this information on my Parkinson ancestors - Harriet Parkinson b.1845-d.1936 was my GG grandmother, she married Joseph Meredith Foxley b. 1847 (GG grandfather).
Their daughter Elsie Foxley b.1882 (G grandmother) married Jim Faulkner b.1873 and were the parents of my gran Freda Faulkner.

I've just come across your website and see that you are related to Harriet Parkinson, born 1845 in Wrenbury. Harriet was the sister of my gg grandfather Thomas Parkinson.

The Parkinsons were tenant famers in Wrenbury. I'm still building my website so all the info I have is not on there but I do have quite a few more details including info on the exact fields they farmed -here's a link to e-maps of Cheshire which show the fields that were farmed by Thomas Parkinson in Wrenbury Heath.

I live quite close to Wrenbury and so I've had a chance to drive by the site. The farmhouse doesn't exist any more. Indeed, there are houses now on both sides of the road where Thomas farmed. The fields on the Wrenbury-Ravensmoor Road are still farmland though. If you type Parkinson in to the map search function you'll also find Thomas's sons Samuel and James were also living in Wrenbury Heath at that time. Samuel was renting a house and a couple of fields whilst James was living with another family a few hundred yards away from Thomas.

What I can tell you is that the Parkinsons as a family lived in Wrenbury until about 1900, by which time, for various reasons, they all moved out of the area. My g.g.grandfather Walter Parkinson (Harriet's nephew) left in the 1890s and ended up as a railway station master in Bangor, N.Wales. My grandfather, Bruce was born in N. Wales but eventually moved to Manchester, which is where I was born (the fact that I live in Crewe only 8 miles or so from Wrenbury is a coincidence).


My mother always used to tell me that the Parkinsons were "gentleman farmers"" (her words) and certainly the early generations were tenant farmers. However, the later censuses show them merely as agricultural labourers so I assume at some point the farm tenancy was lost. I guess that's why they all evetually left the area.
One story my mother always used to tell me was that one of the Parkinsons was known as "Mad" Parkinson - something about him riding round the neighbourhood on a horse threatening people. The story is very sketchy and my mum is unfortunately no longer with us. I'd be interested to know though, whether your father passed down any stories on how the Parkinsons lived or what they were like.