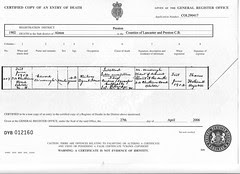 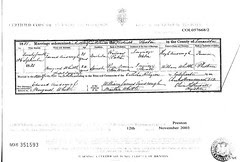 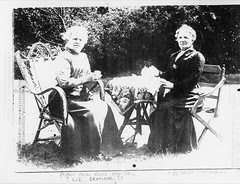 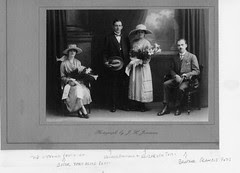 It was lovely to receive an email from Anne Clark (neé Ainscough) yesterday regarding links to this branch of the Ainscough family......and great to see Anne had found the link via Google, hopefully others will too!

You can see more images, including census detail & description on my Flickr pages at:
http://www.flickr.com/photos/barbaraainscough/sets/72157594187366429/

Anne Clark from Hampshire writes:
"I have just been surfing Google for Ainscough family history and by lucky chance came across your Blog. I just had to send you a quick note as I think that we must be related as I have been searching Hugh and Ellen Ainscough family tree. Hugh and Ellen (Cowley) Ainscough are my GG grandparents.
My grand father was Edward Ainscough (1890-1976) and his father was also called Edward (son of Hugh and Ellen) born April 1860 and died 1st June 1902 aged 42 years and occupation Railway signal man. This Edward married Margaret Whittle on 24 September 1881. I have a copy of Hugh Ainscoughs death certificate and it still lists his occupation as farmer although you say that he ran a pub. You seem to have got a lot further with your research than my pathetic attempts as I have got stuck on Hugh's father Thomas. I hope you don't mind but I have printed off all your notes which I will spend a long time reading!
Hoping that we may be able to exchange further information."

I do have a few photos and some certificates but I have found it hard tracing information as all relatives who would remember details are now dead. Unfortunately I did not start the family research whilst they were still alive…..”

The following illustrates how Anne Clark is related to me...Anne is my 3rd cousin once removed. It works like this.... Edward and Thomas AINSCOUGH were brothers, so their sons were cousins, 1st, 2nd, 3rd etc through generations.