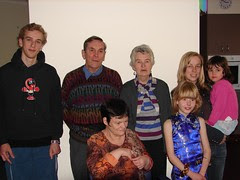 Anthony Brown, Melbourne, Australia (tonybrow@westnet.com.au) writes with the following. I have Anthony to thank for much of the information on this blog and for the earlier geneology work he has undertaken, it was his existing tree, handed to me by my father that inspired me to get started myself to find out more. Anthony is my father's (Peter Ainscough) first cousin. Hugh (1822-1882) & Ellen (Cowley) Ainscough (1824-1895) are Anthony's GG grandparents.

"Hi
Just introducing myself. I am another descendant of Hugh & Ellen living in Australia. I came to Australia in 1927 with my parents Harold Frederick Brown and Margaret Mary (nee Ainscough) and have lived in Melbourne, Victoria ever since.
My mother Margaret was the fourth child of Henry Ainscough (1868 - 1912) and Catherine nee Farley (1872 - 1951)
I have two brothers Harry Kevin & Peter Damien and a sister Margaret Mary who were born in Australia.
I have four children, daughters Jennifer Clare, Rosemary Anne & Jill Patricia, and a son Anthony Gerald.
Also four grandchildren Melanie, Nicholas Emily & Kylara.
In 1954 my mothers youngest brother Harry Ainscough migrated to Australia with his wife Helen & children - Bernadette, Paul & Christopher.
I am a first cousin of Peter Ainscough, father of Barbara.

Best Wishes
Anthony"
Posted by @boobelle at 11:33 am