S has been in touch regarding the (Ainscough) - Anderton family in Holme on Spalding Moor, East Yorkshire. 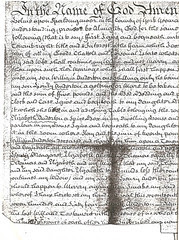 Will of Henry Anderton

"Dear Barbara
I have just found your most interesting “Ainscough Family History” site.
I understand we share a common ancestor, Elizabeth Anderton 1737? – 1815, the wife of George Johnson, a farmer at Lincoln Flatts.
Some years ago, before it was possible to do research on the internet! I spent many an hour at the Borthwick Institute for Historical Research and at Beverley CRO.
I corresponded regularly with Mary Hartley and we shared our research on the Anderton, Johnson & Bielby families. Due to other commitments I had to temporarily put my family research on hold for a few years.
I have taken up my research again and would much appreciate if you have any more information on Elizabeth Anderton. I know she lived on a farm at Arglam for a while and that she was married at Carlton Juxta Snaith and was buried at Seaton Ross.
I am enclosing by attachment a copy of the marriage bond I got from the Borthwick some years ago. As I go through all my papers (mixed up in a large pile on the floor) I will see if there is any thing that could be of interest to you. I cannot remember exactly what I passed to my sister.
Best wishes
S

Hi
Lovely to hear from you. I think the Elizabeth you are enquiring about is the daughter of one of my very distant relatives - Elizabeth (Ainscough) Anderton (1709-1783) was a great auntie of mine - eldest of 5 children of Hugh (1689-1745) and Elizabeth Ainscough and sister of James Ainscough (1711 -1782) of Mawdesley, Lancs. who is my direct ancestor. Above is a snippet of my family tree showing how Elizabeth Ainscough 1709-1783 fits into the Ainscough tree. She married Henry Anderton - incidentally there is reference to an Anderton's mill on the old Mawdesley maps - Ive never been able to check whether this was Henry Anderton's family. When I get a moment I shall send you the links to the info I have. It turns out she is buried just 7 miles from where I live now.......Holme on Spalding Moor- a long way from the rest of her family over in Mawdesley, Lancashire. This Mawdesley Ainscough family have a strong catholic tradition. What caused Elizabeth (Ainscough) & Henry Anderton to move to East Yorkshire I do not know, possibly the Jacobite Rising in 1745??, which Mary Hartley had written notes about. We know from this information that Elizabeth, daughter of Elizabeth (Ainscough) & Henry Anderton witnessed her father Henry & brother Thomas fighting in this battle.
I believe Mary Hartley died some time ago- its all on my blog dated Monday 11th September 2006 - http://ainscough-familyhistory.blogspot.com/2006/09/elizabeth-ainscough-1709-1783-m-henry.html
What specifically would you like to know?
B

Hi Barbara
Thanks for getting back to me.
I would like to find out when Elizabeth Anderton moved to either Carlton or Snaith and what her employment was. I have it in my mind that at some point in her life she worked as a lady’s maid. Unfortunately some of my notes made in the 1980’s were destroyed when a stray dog I took in chewed them up. If you have any info on this I would be delighted, but I suppose its not very likely.
She came from Lancashire to Yorkshire when she was about 10 and lived on a farm at Arglam. 25th October 1764 she married George Johnson a farmer from Lincoln Flatts at Carlton Juxta Snaith. I found the marriage bond at the Borthwick in York and have enclosed it by attachment. Unfortunately the allegation had not survived.
Found from microfilm R.C. MF 102 Liber status animaram (a statement on the spiritual condition of the parish) “Elizabeth Johnson a convert, wife to George Johnson a protestant at Lincoln Flatts, a communicant she has yet no child. She is the daughter of the late Henry Anderton.”
Also found“Elizabeth Anderton relict of the late Henry Anderton a protestant. She returned to the catholic religion and a communicant” I feel Henry Anderton should read George Johnson.
When I lived in Yorkshire I visited Holme Hall where Elizabeth used to worship with her daughters, it was being used by the Sue Ryder charity. Several times I have looked around the church yards at Holme On Spalding Moor & Seaton Ross and photographed headstones.
I find it interesting that after hearing Rev Joseph Benson preach Elizabeth joined the Wesleyan Church, then later on in life went back to the Catholic Church.
I am very pleased to have made contact with you, but have rambled on more than I intended!
Best wishes
S

Hi
I too have spent some time taking photos at All Saints church in Holme on Spalding Moor and also visited the St John the Baptist RC chapel at Holme Hall, although as you say, now a Sue Ryder Centre there is little historical evidence there today in the form of burials. I believe the RC Chapel was opened in 1766, but have been told that the historic All Saints Church at Holme has in the past been catholic- as most churches would have been pre Henry VIII.
Regarding your query, I don't have any detail about Elizabeth Anderton who married George Johnson. All the info. I have on Elizabeth Anderton is listed below, which you probably also have - Im sure this has come from Eric Percival.
Personal Record - Elizabeth AINSCOUGH (mother of Elizabeth Anderton)
Name: Elizabeth AINSCOUGH (2nd wife)
Sex: Female
Spouse: Henry ANDERTON (bef1703-1765)
Birth bef 15 Feb 1709
Christening 15 Feb 1709/10 (app) (age 1)
Death 21 Aug 1783 (age 74) Holme on Spalding Moor, East Yorkshire
Burial 22 Aug 1783 (age 74) Holme on Spalding Moor

ELIZABETH'S PARENTS:
Hugh AINSCOUGH born 1689. A Yeoman Farmer at Mawdesley, Lancs. and 1 spouse Elizabeth. Hugh was in recusant rolls - 1715, 1717
Elizabeth and Hugh AINSCOUGH had the following 5 children all from the Mawdesley, Croston, Lancashire area:

Henry ANDERTON , was the son of William ANDERTON and Margrett HODSON,

Parents of Henry Anderton were:

Ellin died 3weeks after the birth and William was brought up by his Protestant grandparents in Lancashire.

1.2 Elizabeth ANDERTON (1737-bef1815) m George Johnson (1729-1794) at Carlton Juxta Snaith. Elizabeth Anderton was working at Carlton Towers prior to her marriage in 1764 when Thomas Stapleton was the owner 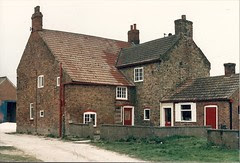 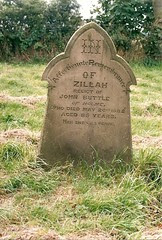 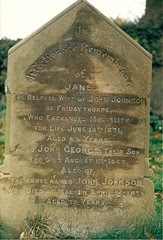 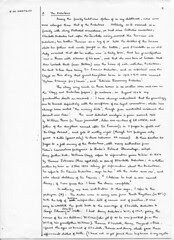 Ive linked page 1 of 3 above - these are handwritten notes sent to me from Eric Percival, researched & written by the infamous Mary Hartley who must have spent hours uncovering the past.....let me know if you would like me to send you the images. You can view the 2 remaining pages by clicking on the above which will take you to my Flickr page. Ive transcribed the most interesting parts of the notes below...enjoy!

"............Among the family traditions spoken of in my childhood none was more colourful than that of the Andertons. Unlikely as it seemed in a family with strong Methodist connections, we had some Catholic ancestors; Elizabeth Anderton had after the Jocobite rising crossed the Pennines into Yorkshire (BA comment: in 1715 they joined the Stuart uprising during which Sir Francis Anderton, 6th Bt. (born after 1681) was convicted of high treason, forfeiting the Lostock estate, Lancs - not sure if the Anderton's are directly related?? ) http://www.thepeerage.com/p11592.htm#i115919); her brother Thomas as a boy of 10 held the bridles of the horses while his father and uncle fought in the battle; and Elizabeth as an old lady asserted that her mother was a lady born; that her grandfather ‘was a Baron with 3 towns of his own’ and that she was born at Lostock Hall. Now Lostock Hall (near Bolton) was the home of rich, catholic Andertons, the last to live there being Sir Francis Anderton, and so insistent were the Cleggs on this story that granddaughters born in 1912 & 1914 were named ‘Sylvia Francis Lewis’ and ‘Patricia Rosemary Anderton’………………….
The final question was about Elizabeth Anderton’s mother who was a lady born – and here the answer was so obvious when I thought of it that I am astonished that none of us thought of it before.........
Whatever else Elizabeth Anderton’s mother was she was born Elizabeth Ainscough, not Anderton and the grandfather who was perhaps a baron or baronet if he existed at all was Elizabeth Ainscough's father.
Catholic ancestors at that period are harder to sort out but I did in the end identify Hugh Ainscough (in the Croston PR though spelled in a very eccentric manner) and recently got a photocopy of the entry in the papist rolls of 1717 and there he is signing clearly, ‘Hugh Ainscough, Yeoman’.
So where is the baron?!"

Hi B
George Johnson d. August 11th 1860, son of John & Jane (Stillborn) died of a broken heart, his grave is at Fridaythorpe. He committed suicide, he fell in love with a woman who did not meet the approval of his parents. I will look out the copy of the suicide note that was published in the newspaper of the day.

By the way, Elizabeth Anderton had a brother Called Henry, born 1740. I found in some records - "A bachelor of dissolute ways and drunken habits. Died in Holme workhouse" He was buried 3rd Jan 1819. 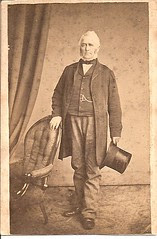 George Johnson died by cutting his throat with a razor. However, it was a broken heart that drove him to this rash action as confirmed by his suicide note.
John Doe