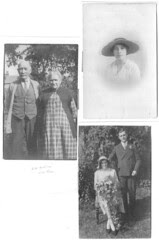 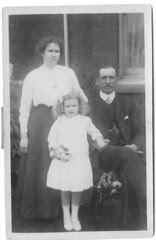 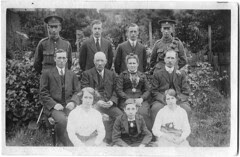 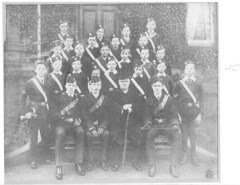 Andrew Scarisbrick has provded 2 trees which illustrate very simply this family's origins, these can be downloaded from the black box on the right: titles: 1.Ainscough Tree early.PDF and 2. Thomas Ainscough 1825 Tree.PDF

On 27 Mar 2008, at 06:44, Graham Ainscough (jng@ainscough.se) wrote:
Dear Barbara,
My name is Graham Ainscough and I found out about your blog through my sister Valerie.
We are descendents of a Lancashire branch of the family. Our great grandfather Nathan we know very little about except that he was probably born in the 1870s in Lancashire. Our grandfather, Richard Thomas Ainscough, was born in Ormskirk on 24 August 1893 and moved down to Ramsgate in Thanet where he married a London girl, Louisa Davis, and gave birth to my father, Richard Thomas Ainscough on August 10th 1919. He married my mother, Margaret Faulkner from Gloucester in 1944 and my sister and I were born in Ramsgate.
One interesting fact about my grandfather and my father is that they were both railwaymen on the Southern Region. My great grandfather was a farmer, so the occupational development appears to tie in with your observation about male members of the family becoming railwaymen.
In 1967 I moved to Sweden. As far as I know we are the only Ainscoughs living in Sweden. Over the years a vague interest in the origins of our family name has gradually grown, particularly as I am fairly certain they stem from Scandinavia. My father was always convinced there was a “Scandinavian connection” and this encouraged me to look further. As you mention in your blog, the Swedish word for forest is “skog”. You have made the link to “oak wood” whereas I’ve made the link to “juniper forest”, which in Swedish is “enskog” with the “en” pronounced “ain”. This theory is partly supported by the fact that there is a quartet of female singers who come from the island of Gotland in the Baltic Sea who call themselves the Ainbusk Singers. Ainbusk translated into English would be “juniper bush”. So the combination of wood/forest/bush and various species to make up family names clearly exists.
The cricket connection is another interesting aspect. My nephew, i.e. Valerie’s son, is the first person to appear on your list of cricketers, i.e. AIRS Ainscough. He has always been interested in and very good at the game and, as the list mentions, has in fact played for Worcestershire 2nd X1. As a teenager in England my summers were completely devoted to cricket. I played for the school team on Saturdays, the local men’s team on Sundays and every other evening of the week was spent in the nets. My father, although not an active player, was also extremely interested in cricket. He was an avid supporter of Kent and umpired quite a few local games in his time.
My biggest regret is that about 20 years ago I turned down the offer from one of my relatives in Southport – I believe from Richard Wareing who was married to Alice Ainscough – to take over the family bible. I was apparently the last male in our branch of the Ainscough family at that time, and they had no use for it themselves. I already owned a family bible (but not my own family’s) and the idea of lugging it over to Sweden was not particularly enticing. If by any chance that bible is still around, I certainly wouldn’t turn the offer down a second time.
My father was convinced about the Scandinavian connection. I’m not sure, but it certainly seems to make sense. And in some way it would be a fitting conclusion. I have always loved living in Sweden. I feel very much at home here, and it would be fascinating to think that of the group of Norsemen who at one time “sacked, raped and pillaged” the inhabitants of Britain one at least has now returned to his origins (I’ve given up the raping and pillaging side but still enjoy a decent bit of sacking every now and then!). If there would be any interest in doing a DNA test on me, I would also be up for it, by the way.
Thank you for your good work on the blog and I look forward to further fascinating revelations.

On 27 Mar 2008, at 08:29, barbara ainscough wrote:
Graham
Its lovely to hear from you. When I get time I shall see if I can make a link here back to Ormskirk. This information will really help others - I have a number of Ainscoughs on the blog that cannot link directly with our Mawdesley Ainscough branch - although they originate from very close by - Scarisbrick and Southport. The blog has been a huge help to others tracing their families. Also if you have any census detail, wills, old photos of parents/ grandparents that I could add to the blog - this would be great - pictures add clarity.
Thanks for the cricketer info. - I have often wondered who they all are.
Strangely enough my gran was also a Faulkner!!! (Fathers mother). I shall be adding your translation to Ainscough wikipedia - always good to get alternatives thrown up there.... obviously meaning a wooded area.
Keep in touch.
B

On 27 Mar 2008, at 17:04, Andrew Scarisbrick wrote:
Hello Graham, and everyone
Yes, your Richard and Nathan Ainscough come from my branch of the Ainscough family.
Nathan was married to an Ellen Threlfall, and was the son of Thomas Ainscough and Jane Seddon. Churchtown is a small village on the outskirts of Southport, just bordering Scarisbrick, and it is in Churchtown that the old parish church of North Meols is located, where practically all this branch of the Ainscoughs used. I have the records for the earlier generations of this branch of the Ainscoughs from this church.
Attached are a couple of trees showing your Ainscough family, up to Richard b. 1893, which I hope you will find useful. If you have any other questions, do ask me.
Regards,
Andrew Scarisbrick.