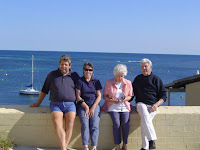 Great to hear from Mark Ainscough in South Fremantle, Western Australia - Ive been waiting for them to get in touch for sometime! Mark and Ruth are my 2nd cousins but I know nothing about them or their families apart from the fact that they existed and were in the tree that Tony Brown passed on.....Im hoping I will find out more soon though... Marks grandfather Thomas Ainscough was one of my grandfather's older brothers. if you click on the wedding photo it will take you to my Flickr where you can read a description and find out who they all were. 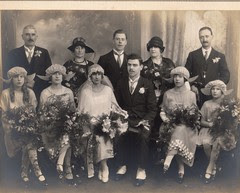 On 4 May 2008, at 10:05, Mark Ainscough (ains500@gmail.com) wrote:
Dear Barbara, I cannot explain how excited we were to see your Blog.
As it happened Cathy and I were in Denmark (West Aust) with my parents (Terence and Mabel) and my Sister (Ruth) when I received an email from my son's (Chris) wife Jesse. Her email was all about your Blog! We are now going to dig through the archives and find any photos we can of Dad as a child and his family. He recalls well, the photo you have of his parents getting married. It was always on display in his Mum and Dad's home (Thomas and Mamie).
Well done Barbara, I will Scan some photos and send them to you when I am back in Fremantle (work).
In brief, we lived in Rainow Near Macclesfield, Cheshire until 1966. Dad was offered a contract with Australian Commonwealth and we have been (apart from some holidays back in in England) in Australia ever since.
Talk more soon. Attached is a photo taken of us on Rottnest Island WA 2002.
This is going to be fun.......
Mark Ainscough

On 20 May 2008, at 07:25, Anthony Brown wrote:
Hi all glad to hear from you
I remember you from when you lived in Melbourne, before moving west .
My grandmother Catherine Ainscough nee Farley was widowed in 1912, and married William Henry Seymour , nicknamed POP in 1924 (registered in June Q 1924 8d 693.
I remember him as My mother and my brother Kevin & sister Margaret and myself stayed with them for some months when we visited England in 1937.
regards
Anthony Brown
Posted by @boobelle at 11:52 am