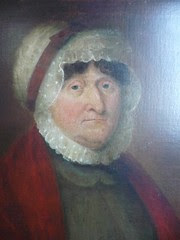 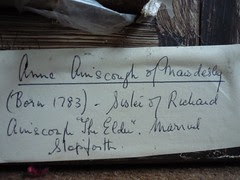 On 16 Nov 2008, at 15:21, Andrew Scarisbrick (andy_scarisbrick@hotmail.com) wrote:
Hi Barbara.
Do you ever get the feeling, when doing family research, that you end up going round in circles? I seem to be finding that at the moment.

Second: I have also been doing some work on my mother's ancestry, and have traced back to a Margaret Ditchfield, nee Stopforth, daughter of James Stopforth, b. 1779, Lathom. I have found James' baptism at the Douglas chapel, Lancashire, and he was the son of William and Ann Stopforth. I have also found the marriage of a William Stopforth to an Ann Ainscough at Ormskirk in 1775.

Do you remember the wills of Hugh Ainscough of Ormskirk, liquor merchant, and Margaret Ainscough of Ormskirk, spinster, both died around 1812/3? They were brother and sister of your ancestor John, who married Margaret Worthington; so children of James Ainscough b. c. 1711. They both mentioned their sister Ann Stopforth (Stopford), wife of William. Hugh names two of her sons as John and Henry; Margaret says she has five sons.

Well, I can find the baptism of sons Edward, 1776; James, 1779 (see above); and John, 1781; with links to a possible William. Not sure about Henry yet.
Does this make sense to you? If so, it would definitely appear that I am descended from this Ann Stopforth nee Ainscough, b. ~1842. So I have another line of Ainscough ancestry.
All my research comes round again.
Please tell me what you think.
Andy

On 17 Nov 2008, at 20:43, barbara ainscough wrote:
Hi Andy - well done for the detective work and joining up of families!
thanks for this information...yes the names are very familiar and Im sure I have links to the Stopforth and Speakman families in the blog. I definitely recall the Wills of Hugh Ainscough liqour mercahnt and spinster sister Margaret Ainscough and the mention of their sister Ann Stopforth. Fascinating that you are linked to more than 1 line of Ainscoughs....have you access to any new Will information?? The Hugh and Margaret Wills are available on the blog and also in my Flickr area, infact im sure it was you who sent them to me previously. I shall look into Susannah Ainscough born around 1770 - the Parbold Ainscough branch spring to mind here.....sure Ive seen the Speakman/ Ainscough link here....leave it with me, perhaps Mary and Anthony Ainscough (Parbold) can help out.

Also John Stopforth, Canada, (stopforj@shaw.ca) has provided information in the past about the Stopforth links....maybe try him??
B

On 20 Nov 2008, at 12:56, Andrew Scarisbrick wrote:
Hi Barbara.
Thanks for your help. I am sure someone will know this mystery Susannah.
I was rather surprised (and worried) when I turned up the Stopforth/Ainscough marriage, and realised I had another Ainscough link in my family. I have no further wills at present, but intend to look for some Stopforth wills as soon as I get the chance.
It is also rather amazing how all these families interlink with one another. I have a younger son of Joseph Speakman and Susannah Ainscough, Richard, b. ~1814, Dalton, as marrying Mary Ainscough, youngest sister of Hugh (1816) of the Parbold branch.
I also have the Speakmans as connected to Faircloughs - I am not sure if there is a connection to the Susan/Susannah Fairclough who married Hugh Ainscough (1816) - I am looking at it.
But you can definitely see a complicated 'web' emerging amongst these families. If you are interested, I can pass on what I have on the Speakmans - although it is not yet complete.
Regards
Andy

p.s. I have connected that John Stopforth, and we are exchanging Stopforth info.

On 20 Nov 2008, at 13:31, barbara ainscough wrote:
Hi
anything and everything please ...especially those fab. family trees you draw - even if they are small. As long as there is some ref. to an Ainscough in there I can find an excuse to blog it...it definitely rings bells in the Parbold line to me too. I bet there is a link to Susannah Fairclough who was Mary Ainscoughs (parbold) GG grandad.
Glad you have mailed John Stopforth in Canada, I hope this turns something new up, he will be a good contact and from what I recall he has done quite a bit of work on the family. I really wouldnt worry about 2 Ainscough families turning up in your family. It semed to be qite a common thing, you will probably find they are very distantly related. Our tree also shows Ainscoughs marrying Ainscoughs. I must find out where and when, thinking about it, this could also be the same instance you mention.
B

On 22 Nov 2008, at 14:21, Andrew Scarisbrick wrote:
Hi Barbara.
Here are a few trees for you, showing some Speakmans, Stopforths and Faircloughs - with their Ainscough connections. They are still works in progress, so are not fully finished, and they may yet grow.
Also be aware that there are brackets around the 'descendant' lines for some children. These means that I have not found 100% proof that they are with the correct parents, but there is usually some logical deduction for them being there, so it would seem highly probable. Last time I spoke to you, there were about three times as many brackets - which I have since proven (my theories were correct) using the registers of Burscough RC chapel, now St. John the Evangelist.

First is the Joseph Speakman tree, who married the Susannah Ainscough xxx/1793. Note that two of their children married Faircloughs, and (I think) one son married an Ainscough.
Second is a James Speakman tree, who I believe could be a brother of the Joseph above. It was this branch I started researching for someone else (descendant through the Atherton Halsall line). This branch has no connection with Ainscoughs, but I have included it because there is a Speakman/Speakman marriage between the two branches(just to make it more confusing!).
Third is a large Speakman tree connecting what I think are the two brothers, above.
Fourth is the Fairclough (Of Wrightington) tree. I have now proven that the Susannah Fairclough who married Hugh Ainscough (1816) was the daughter of Hugh Fairclough and Catherine Speakman (Catherine daughter of Joseph Speakman and Susannah Ainscough). I hope you can understand these trees because there is a lot of intermarrying going on between these families. The only 'missing link' is where the Susannah Ainscough, b. c.1770 fits in.
Lastly is the Stopforth tree, showing the descendants of William Stopforth and Ann Ainscough.
Records:
marriage date of Joseph Speakman to Susannah Ainscough - 11th April 1793, at Ormskirk
When looking at the records of Burscough RC Chapel, as above, I found the following Ainscough related baptisms;
b. 13/8/1794 - chr. 15/8/1794 - Matthias s. Joseph & Susannah Speakman (nee Ainscough)
b. 6/1/1796 - chr. 7/1/1796 - Hugh s. Joseph & Susannah Speakman (nee Ainscough)
chr. 23/7/1809 - Edward s. Henry & Margaret Ainscough
b. 15/3/1834 - chr. 16/3/1834 - Margaret d. James & Elizabeth Cave (nee Ainscough)

The Speakmans are obvious, but I thought you may be interested in the others. I will try to see where they fit in.
Best Regards,
Andy.

On 18 Dec 2008, at 12:53, Andrew Scarisbrick wrote:
Hi Barbara.
Thank you, that is really interesting. The Anne Ainscough b. 1783, when you say she is the sister of Richard A the elder, I am presuming you mean Richard Ainscough b. 1770 who married Elizabeth Livesey, father of H&R.

If so, I am sadly lacking in details of this family (i.e. Richard's brothers and sisters - I only know of one, James, who died 1818 Ulnes Walton) so that is useful info; and she will be distantly related to me through the Ainscoughs. I will see if I can find who she married, and if it is one of my Stopforths.

I have found the following burials at Croston church, from the online parish clerk, and I wondered if you had seen them? Do you think (as I do) that they belong to Thomas (b. 1715) and Richard (b. 1719), sons of Hugh Ainscough (very senior, b. ~1685)? If so, they could help to build up knowledge of this generation of the family.