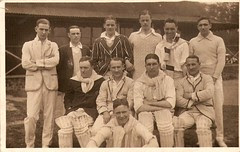 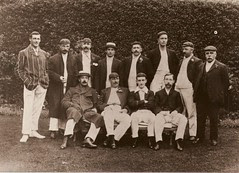 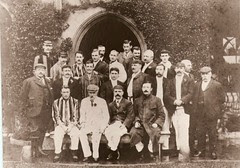 Images are from Ken Lea (kenandolwen@hotmail.com) with this information:
"The first photo is of an Ormskirk Cricket team circa 1935. Martin Ainscough is on the left of the middle row.
The second and third photos are not of Ormskirk CC and, I believe,not Wigan. It is more likely to have Ampleforth connections,judging by the blazers and "demeanour"!! I think that TOM is second from the left on the back row and HUGO far right on the front. I would only be guessing to name another. Can you help?
The third photo is similar I think that TOM is at the back,capless,in the porch doorway and HUGO bottom row,far right. Any help in identifying, welcome!!"

On 16 Dec 2008, at 15:56, Ken Lea (kenandolwen@hotmail.com) wrote:
Hello,
I'm President and Historian of Ormskirk Cricket Club and recognise my writing on a couple of your photos! Probably via my friend, Don Ambrose. I will produce a book on the History of the Club in 2010,to commemorate our 175th.Anniversary. I will put you on my list to receive a copy if you wish as the Aiscough brothers will figure with its early development. Although there was some involvement with Wigan by the brothers (dual and treble membership was common) most of their cricket was with Ormskirk. I have a theory, concerning dogs, as to why Ormskirk was the greater attraction!!! I'll be glad to correspond if it helps with your research/interest.
Regards,
Ken Lea

On 16 Dec 2008, at 16:03, Barbara Ainscough wrote:
Many thanks Ken...the photos were passed on to me via Anthony Ainscough, Parbold. This links to the following blog entries:

Also have you seen the blog entry of November 25th 2008 about the Wigan cricketers? Peter Lomax (peter_lomax@hotmail.co.uk) wrote:
.......Hi Barbara
I am researching the complete history of the Wigan Cricket Club for a dvd film and have found many links with the Ainscough family of (or nearby) Wigan.......
I wondered if it might be worth you getting in touch with Peter - sounds like you are likely to have the relevant facts about some of the Ainscoughs he is asking about.
B
Posted by @boobelle at 4:03 pm