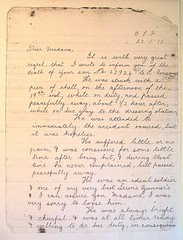 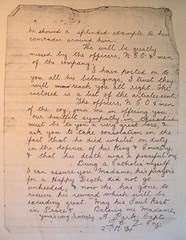 On 15 Jun 2009, at 17:30, Geoff Carefoot (geoff_carefoot@hotmail.com) wrote:
Dear Barbara,
I chanced upon your family history blog whilst surfing "t'interweb" and wondered if you would be interested in further information on Richard which you may not have or which you may like to pass on to other relatives with an interest in the military.
Although I now live in the south of France I was born, and brought up in Longridge, Lancs and spent some time researching local men who died in the Great War , especially as Longridge does not have a 'proper' war memorial (it has a 'memorial' playing field)
About 20 years ago I put a request in the local paper for any information pertaining to Longridge men who had died in the Great War, hoping that surviving relatives might have some information. I had but a solitary response but the lady had the original two-sided letter written in the trenches by Captain A. Park, O. C. "Z" Company, 2nd Royal Fusilers, on the 22nd of May, 1918, to Private Ainscough's mother. I have a photocopy and would be delighted to send you a copy. His details in "Soldiers Died in the Great War" are pretty similar to those supplied by CWGC but state that he was formerly 16/38196, K. L. R. = King's (Liverpool) Regiment and it would appear likely that he enlisted in the King's who were more likely to be recruiting in Lancashire and was probably transferred to the Royal Fusiliers following recuperation from wounds/injuries.
Regards,
Geoff Carefoot
Posted by @boobelle at 7:29 pm