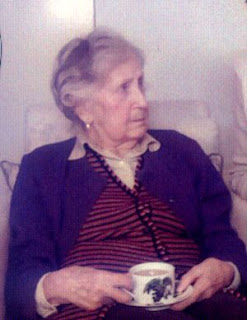 Angela Withnell of Hammersmith died on 13th January 2010 of pneumonia, aged 93 years. Her mother was Annie Ainscough of Lancaster House who married Randall Withnell. (Annie's sister, Mary, also married a Withnell - Thomas. She was killed by a motorbike).
Angela was godmother to Angela Swift, (nee Sidgreaves, grand-daughter of John Ainscough of Briars), who described her as a super person. Her nephew, Sebastian Withnell, has indicated that the funeral is to be at Mortlake Cemetery at 2pm on February 1st.


Just a few more details for those that would like more background information:
Hugh Ainscough (Mary & Tony Ainscough's great grandfather) married Susan Fairclough. Their youngest daughter Ann married Randall Withnell and had 2 Children : Anthony and Angela. Angela did not have any children but her nephew Sebastian frequently called on her in her flat in Hammersmith.
Posted by @boobelle at 6:57 pm