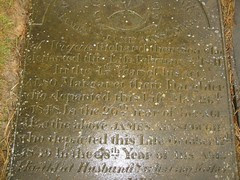 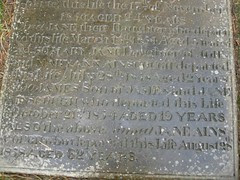 Ann Reynolds (ann@ann62.orangehome.co.uk)has been in touch and writes the following:

Hi Barbara
I have just been looking on the Ainscough Family History-Mawdesley site and found Edward Ainscough who was married to Dorothy Cowell then to Mary Ann Harrison,this Edward is my greatgrandad Richard's brother,his parents were James Ainscough & Jane Sergant (as spelt on my ggrandad's birth cert) on IGI it is spelt Serjeant, do we have a connection? Look forward to hearing from you. By the way James' son Richard my GGrandad was born 28 Sept 1842 Standish,Wigan. He married Harriet Latham on 9 Feb 1864 in St John's Chapel Wigan and he died 25 Jan 1891 at Rainhill Asylum.
Ann

Ann - welcome cousin!
I am pleased to say Ann that there is a connection - we are related all be it very distant! From the records given to me, researched by Anthony Brown, Aus. James & Jane had around 10 children. I have also found their gravestone in St Peter & Paul's RC Churchyard, Mawdesley along with a few of their children & grandchildren - see the images above. However, I have not had time to work out who they all are on the stone but it looks as though we have both James & Jane, their son Richard no.1 (4yrs), daughter Margaret (20yrs), Elizabeth wife1 (24yrs) of John & daughters Jane (3yrs) & Mary Jane (2yrs) and finally James the son of James & Jane (19yrs). You say your great-grandad was Richard, who was probably the youngest of the 10 children and also their second child named Richard, the 1st Richard Ive already mentioned, died at only 4yrs.
The tree outline looks something like this- if you can provide me with further or more accurate detail this would be appreciated.

You might find it helpful to download "barbara's_treeblog pdf" from the black box widget on the right to see our relationship. Also there are 2 specific pdf files which focus on this family, "JamesAinscough_1755tree.pdf" & "AinscoughJames[56].pdf" document to download in the shared box area (on the right). This has lots of evidence to support your tree. We have Andy Scarisbrick to thank - he has recently (2007) put it together so you may like to contact him if you have any queries over evidence etc. Open the file & zoom in to see detail.