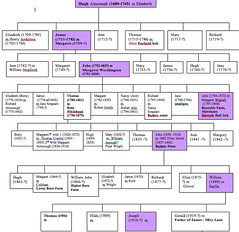 On my most recent trip to the area I decided to stop off at Wrightington to make a short trip to the churchyard of St Joseph's RC in Wrightington. Recent correspondence with Jo Horridge and John Cobham had made me curious... as you can see there are a number of Ainscoughs buried here and I think I can place most of them in our tree - many are likely to be children of John (1838-1916)and Ellen (Smith) (1837-1892) Ainscough of Rutters Farm, Mawdesley and grandchildren of John (1794-1872) & Margaret(Wignall)(1797-1866)Ainscough of Reynolds Farm, Mawdesley. John Ainscough (1794-1872) was the brother of my 4x Great-grandad Thomas(1778-1861) who married Betty Whitehead (1797-1879) which makes John Ainscough(1838-1916) who married Ellen (Smith) (1837-1892) Thomas' nephew.
However, there are still a couple of graves that I am unsure about. If anybody can offer any further information or detail on these I would love to hear from you. I am hazarding a guess at most of this but here goes.....please feel free to correct me if I'm wrong. 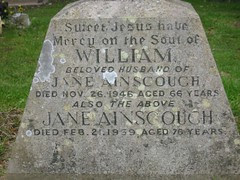 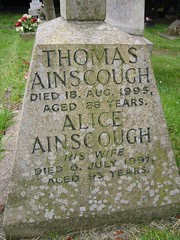 Vincent John Ainscough (1901-1963) & Elizabeth Ann Ainscough (1901-1977)
I have no information on Vincent or Elizabeth Ann, but John Cobham thinks that perhaps Vincent is his Uncle Wilf's brother - he had a brother Vin, as he called him but thinks he lived later than that - awaiting further information.
Christina Uduwerage-Perera (cmuperera@me.com) adds the following:
"I believe this is Vincent John Ainscough, son of Hugh Ainscough and Elizabeth Darwin. He married Elizabeth Ann Turner in 1928 and they had a son also called Vincent J. born 1933. The only sibling I can see for Vincent Snr is called Joseph (b 1899) whilst the only sibling for Vincent Jnr is Pauline (b 1936) ".

Adrian Rigby also adds the following:
"I'm contacting you after finding your blog on Ainscough family history. My Grandad was Vincent Ainscough who is buried with my Grandma Elizabeth Ainscough in the Catholic church at Wrightington, the grave you could not identify. Very briefly it was Vincent who's brother Billy founded Ainscoughs' business empire from his scrap yard at Mosseylea. My granddad worked down the pit during the day and drove Billy's lorry (Billy could not drive) back from where ever he had been buying bomb damaged goods from.
Liverpool dock was a favourite from what I have been told.
I will be seeing my mum over Christmas and will tell her about this contact. Her name is Pauline Ainscough who was married to a Derek Rigby (my father)." 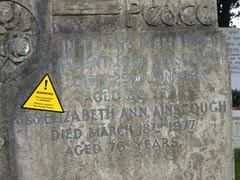 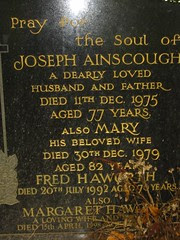 Hi Barbara....John W Ainscough 1866 did marry Teresa(Theresa) Valentine b. 1872. They married 1897 Wigan. The Mary Ainscough on the Headstone I believe is John's sister. Mary 1868 married a Joseph Valentine b. 1869 d. 1899. They married in 1897 Wigan also. I don't know why Mary does not have her married name on the stone, unless it was because she was only married for a couple of years. As far as who Oswald Thomas is, I can only suspect that he is the son of John and Teresa.
Hope this helps.
Nancy Engelhardt....descendant of Nancy (Ainscough) Alty 1784-1851.