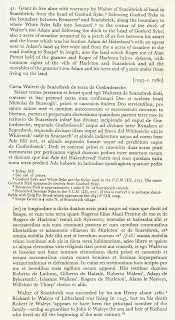 The Cartulary of Burscough priory - text reads:
Aykescogh_1
41. …also the land which Roger son of Alan Prentut held of the grantor and Roger of Harleton below Aykescou, with common rights of the vills of Harleton and Scarisbrick and all of the movables of the grantor’s son Adam and his heirs and of 3 men under them living on the land. [1245-c.1260]

For those of you interested in finding out more about early Ainscough history and origins in the Ormskirk region you might like to read the following deeds taken from The Cartulary dated 1199-c1230. - 'the place called Ayscogh'
Andrew Scarisbrick has unearthed this information while researching his own family history based around Scarisbrick. It's interesting that already the spelling of the name is changing, the earliest reference in 1199 is 'Ayscogh', but then changes just 50 years later to 'Aykescogh' in the mid thirteenth century.....
Many thanks Andy for forwarding this.....I have uploaded the files to the black box widget for easy download should anybody want to read the detail- there are 3 pages 'Ayscogh 1,2 & 3'.

Hi Barbara
I have found some more Ainscough information. More deeds referring to the place Ayscogh, in the cartulary of Burscough priory, and church records from St Elizabeth's Catholic Church in Scarisbrick. Hope you find these useful and/or interesting.
Best Regards
Andy 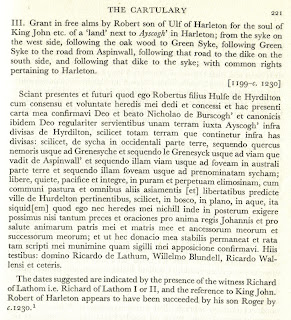 Ayscogh_3
The Cartulary
III. Grant in free alms by Robert son of Ulf of Harleton for the soul of King John etc. of a ‘land’ next to Ayscogh’ in Harleton; from the syke on the west side, following the oak wood to Green Syke, following Green Syke to the road from Aspinwall, following that road to the dike on the south side, and following that dike to the syke; with common rights pertaining to Harleton. [1199-c.1230] 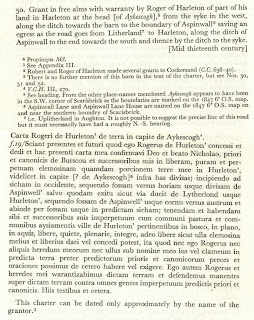