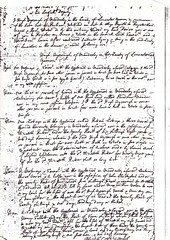 I met with my cousin Mike Ainscough the other day when he temporarily leant me a packed folder full of allsorts of Ainscough History......it turns out that much of this is information originally researched by Tony Brown, Aus. & my dad Peter. So many thanks Tony & dad! But like I said it is a temporary loan and has to go back to Uncle John asap....so Im manically sifting through, photocopying bits & pieces Ive never seen before & hope to have it all scanned & blogged for all to see. Oh & by the way, just in case you think I am a lousy speller & have difficulties with grammar or a stutter - Ive copied it word for word & letter for letter - honestly!

Anyway, Ive heard relatives talk about the 1717 Papists Return often & here we have the extract relating to Hugh Aiscough b. 1689-1745, Mawdesley.....I had a little problem with some of the vocab. so Jonathon Hopper has kindly translated the following words:

boon n. A benefit bestowed, especially one bestowed in response to a request. A timely blessing or benefit
messuage:A dwelling house, its outbuildings and land, from Old French mesnage
Appentence---- A strong wanting of what promises joy and pleasure. (Cant be right!!!)


Extract from the register of Papist Estates 3rd July 1717

To the Clerk of the Peace of & for the County of Pallatyne of Lanc.r. Or his Lawful Deputy.

I Hugh Ayscough of Mawdesley in the County of Lancaster Yeoman in pursuance of the late Act of Parliament Instituted an Act to oblige Papists to register their names & Real Estates do by this writing Under my hand Desire you or one of you to Register my Name & Estate in the Severall Lands Tenem.ts & Hereditam.ts herein after mentioned Scituate lying & being in the said County of Lancaster in the manner & words ffollowing viz:

Hugh Ayscough of Mawdesley in the County of Lancaster Yeoman

Imprit One Messuage & Tenem.t with the Appentences in Mawdesley afores.d (wherein of the s.d Hugh Ayscough or some other person or persons in trust for mee have or hath an Estate in ffee Bayle Generall or in ffee Bayle Speciall) Containing nine acres or thereab.ts now in my possession.

Item One Close or parcel of Ground with the Appentences in Mawdesley afore.d Containing one Acre & halfe of one Rood land called Bradshaw Meadow now in my own possion wherein I the s.d Hugh Ayscough or some other person or persons in trust for mee have or hath an Estate in ffee simple.

Item One Cottage with the Appentences called Rutters Cottage & three Acres of Ground thereunto belonging in Mawdesley afores.d now in the possession of Elizabeth Rutter widow under the Yearly Rent of Six shillings eight pence & two days shearing wherein I the s.d Hugh Ayscough or some other person or persons in trust for mee have or Hath an Estate in ffee simple. Expectant upon the determination of a Lease made by Thomas Crook of Leyland Gentleman unto the s.d Elizabeth Rutter for Ninety Nine years If she the s.d Elizabeth Rutter shall so long live.

Item A Messuage & Tenem.t with the Apptences in Mawdesley afores.d Containing three Acres & a halfe now in the possession of John Christophers under the Yearly Rent of four pounds & five shillings dages & repairs to be allowed & deducted all which I hold by Loan under Maximillian Nelson to mee & my heirs for the lifes of mee the s.d Hugh Ayscough James & Ann My son & daughter & the longest liver of us & or the yearly rent of twenty shillings & one day loading dung or slutch.

Item A Cottage with the Apptences in Mawdesley afores.d now in the possession of Henry Talbott under the Rent of Tenn shillings Under John Stafford Esq. which I hold by Loane to mee my Exc.rs Adm.rs & asn for the lifes of Elizabeth my wife James & Elizabeth My son & daughter & the longest liver of them under the yearly rent of one shilling three pence & boons one day heaving dung one day delving & wheeling turfs & one fat hen & days shearing