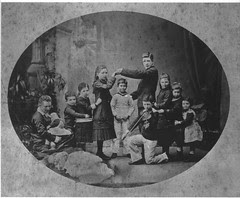 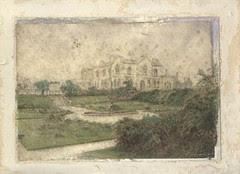 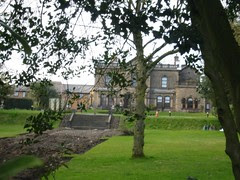 Information taken from the “Our Lady & All Saints, Parbold” handbook pg. 24 – Centenary 1984. The same information can also be found on the Church website.
http://www.ourladysparbold.org.uk/

If you do manage to visit the Our Lady & All Saints RC Church, Parbold then take a moment to view Lancaster House, it really is stunning! At the Church from the rear car park and facing the Church, Lancaster House can be just seen on the left through hedges & trees. This was the family home of Hugh AINSCOUGH (1816-1894) and Susanna (FAIRCLOUGH) Ainscough (1830-1923)- Parbold Benefactors. As far as I know Hugh had commissioned it to be built and it was here that the 12 Ainscough children were raised, many of them were born here too.

“Between 1929 and 1947 the former home of Hugh Ainscough and his family was rented to the Sisters of Notre Dame, of Everton Valley, Liverpool, who used it for short term and summer holidays.
Records state that the first Mass to be offered there was on March 6, 1930, but to be strictly accurate Fr. Brown, with special permission from the Holy See, had offered it several times there during Hugh Ainscough's illness. With the bombing of Liverpool during the Second World War the entire Everton Valley community evacuated to Parbold, May 3, 1941, and remained until 1945 although some remained in retirement.
The property was purchased by the congregation of Notre Dame on October 13, 1947, and since 1965 has been used for aged and invalided sisters, and as a Pastoral Centre. It currently holds the Offices of the Provincialate Team for the Notre Dame Sisters.”
Posted by @boobelle at 4:44 pm