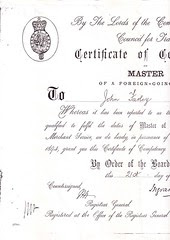 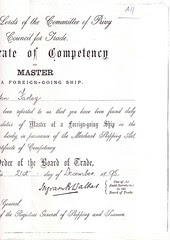 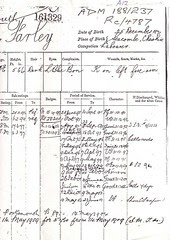 If like me you are asking yourself "Who was John Farley?" then read on....he was my Great great Uncle.

(Medical):Extract from New York Times of Sun May 17 1896 page 16 "Incoming Steamships today ROSSE St. Lucia May 9" New York Times Tuesday May 19 1896 page1 "SECOND MATE JOHN FARLEY SHOT His brutality to a sailorman may cost him his life. John Farley, second mate of the steamship ROSSE, lying at Martins Stores, Furman St. Brooklyn, was shot twice yesterday morning by Ernest Smith, one of the sailors. Farley, it is said, treated the sailors in a brutal manner on the voyage from England, to this port, and was particularly abusive to Smith, who rankled under the assault until yesterday. Farley had ordered a sailor named Evans to go forward and scrub the decks, and when he did so another officer asked Evans what he was doing there, as he had been sent aloft to furl the sails. Evans told him that Farley had sent him forward, and Farley, hearing the remark, knocked the sailor down and gave him a severe cut over the eye. Farley met Smith ten minutes later and threatened to kick him because he did not move quickly enough in obeying an order given by Farley. Farley, the members of the crew say, then ran after Smith and struck him on the face, knocking him down. As Smith arose he drew a revolver and fired twice, one of the shots striking the mate in the breast near the throat and the other entering a little lower. The mate was taken to the Brooklyn Hospital and Smith, Evans and four others were arrested. Farley's injuries are said to be of a serious nature."
New York Times Monday 25 1896 page 10" Sailed.. ROSSE for London."
From General Register & Record Office of Shipping & Seamen Ref: DA/111/87 22 July 1987 "John FARLEY born England, 2nd Mate S.S.ROSSE, Official Number 74475, registered Liverpool. Died 27.5.96 aged 35 at Brooklyn Hospital, N.Y. Pistol shot wound in chest inflicted by E. Smith, seaman on S.S. ROSSE"