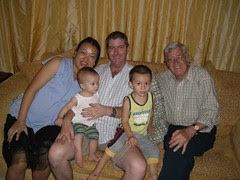 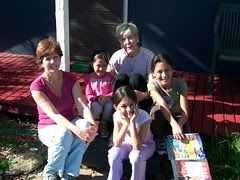 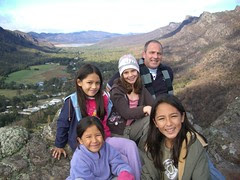 Now that was quick..... no sooner had I written "looking to make contact with a Tony Gerard Ainscough, Adelaide, Aus" does he send me an email with lots of family info.
tony.ainscough@agincourtresources.com.au

The photographs show his family members in the following order:

1. Brother Michael, his wife Sohong and 2 of his children with Uncle Davis in my Singapore home 2007.
2. My Mum, my 3 girls and sister Jenny in NSW
3. Brother david, my three girls and Davids daughter Georgia at Halls Gap (the Grampians, Victoria).

At the moment Im not sure if this Ainscough family fit into any of our Mawedesley/ Parbold Ainscough trees....but Tony says his grandfather came from Salford and many of our family now live in Swinton, the move to Swinton was made from Moston which is where my G grandad Henry b. 1868 lived and worked as Station Master....and Ive been told that Moston is not a million miles from Salford (certainly not by Australian standards!)
A brief look at our tree indicates that Henry had a younger brother George b.1874 - could it be possible that he had a son George b.1898?? or his other brothers Hugh b. 1872 or Francis b. 1875 might be a link??? Anyway thats another wild stab in the dark...Im too good at that! Tony- if you have any further info. about your Great grandfather that would be useful......and I can stop guessing then.

I can quickly tell you what I know about our Ainscough family....and together we can find out a bit more.
My Grandfather was George Ainscough, born in Salford in 1898 (check 1896??), emigrated to Australia and worked in the railways opening up the remote parts of South Australia and Western Australia. He married a lady called Ada Meana Prettoria Murphy, and had 2 children. My father Ronald Joseph Ainscough and his younger brother (my Uncle) David Ainscough.
Apparently George ainscough was Protestant and converted when marrying a very Catholic Murphy. I only mention this because Ed had said that the Ainscough’s were a very Catholic family. I told him that my understanding was that George had converted when married. He served in both wars in the AIF (?) in the Engineers. He returned to Australia and lived out his days as a lovely gentle man in Glenelg, a beachside suburb of Adelaide, Australia. Never sick a day that I knew him.....he died suddenly in bed. As a young boy I remember how moving the funeral was with all his old army friends around to pay tribute.

My dad (Ron) started his life in remote (railway towns), Tailem bend, Murray Bridge and worse. He worked as a young telegraph operator. Dad married Anne Louise Symmons and had 5 children who are all alive today. Ron passed away some years ago at the young age of 64, having worked his way to senior role in TELSTRA (telecom Australia). Oldest child (Jennifer) now living in Canberra, has 2 girls. Second is my brother David living in Adelaide and has 2 teenage boys and a daughter, he works for Newmont. Then myself (Tony Gerard Ainscough, Mechanical Engineer having worked in Indonesia for the past 15 years in the Gold Mining Industry and I have 3 gorgeous daughters (Anne, Josephine and Louise), we currently reside in Singapore. My younger brother Michael lives with his family in Singapore too, he is a teacher and has one young son and two baby daughters). Last but not least is the youngest, Cathy Peterson (nee Ainscough). My genius younger sister who is a GP and has already borne 5 young children.

My Uncle David was the family member who has done quite some work to trace the family tree. He was most excited when I told him about my meeting with Ed, and I gave him the blog address. Hopefully you will hear from him.
I'll try to attach some photos....sorry they are so large I will try reduce the size later.
Tony Ainscough"
Posted by @boobelle at 7:51 pm