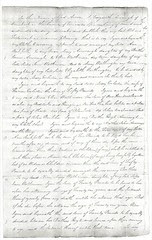 John Stopforth, Canada, (stopforj@shaw.ca) has been in touch and sent me this interesting information by email.....which has just allowed me to make the connection to other bits of info. which Andy Scarisbrick had previously uncovered - Margaret Ainscough d. 1812, Spinster (see blog of Sunday, January 21, 2007)

The title is also linked to this url....click on it and it will take you to the earlier blog.
http://ainscough-familyhistory.blogspot.com/2007/01/will-margaret-ainscough-8th-march.html

Margaret's WILL clearly identifies all of her siblings; her late sister Jane who married (1765-?) m (2nd October 1786 in Leyland) John Watkinson;

also lots of other info. about our Ainscough family like sister Mary who married an Eccleston, Elizabeth (who we have no mention of in the tree yet!) married a Worthington. She also mentions brothers Hugh, John & James; John of course is my direct ancestor,

I have a Ann Ainsworth married William Stopforth at St. Peter and St. Paul Ormskirk, Nov. 5, 1775.
This is probably your Ann mentionned in the Will of Margaret 1812.
Misspelling of your last name wouldn't have been unsual, mine has a dozen spellings.
The marriage register has Ann from Mawdersley.
I have record of the following children for Ann and William:
Edward 1775
James 1779
John 1780
William 1784
Ann 1790
Alice 1790

Margaret's Will had five sons, one missing?

For WILL detail see previous blog of Sunday, January 21, 2007

Andy Scarisbrick has already worked out the following - but I never made the connection until the email from John Stopforth, Canada:
"Oh, and in St Helens church, I found the marriage of Mary Ainscough to Thomas Eccleston. Mary was the sister of Hugh (d. 1813), John and James.
Margaret Ainscough d. 1812 was another sister of Mary, Hugh, John and James above."

The Will of Margaret Ainscough of Ormskirk, Spinster.
"In the name of God Amen I Margaret Ainscough of Ormskirk in the County of Lancaster Spinster, being of sound mind and understanding do make and publish this my last Will and Testament in manner following that is to say I give and bequeath my clothes and wearing apparel to and amongst my Sister Ann Stopforth, to my niece Mary Ainscough daughter of my Brother James Ainscough, to my Ellen Watkinson my niece daughter of my late Sister Jane Watkinson, And to Mary Worthington my niece daughter of my late Sister Elizabeth Worthington, to be divided by my sister Mary Eccleston in the way and manner she thinks best."

I shall now update the family tree outline to include all children of James 1711 & Margaret....

"Hello Barbara,
I have one more Ainscough in my records.
I have the Will of William Stopforth 1672 of Lathom.
In the Will, he mentions his sister as one of the executors, Jane Aiscough.
Any idea who she might be?"
Posted by @boobelle at 6:35 am