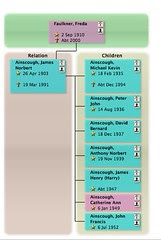 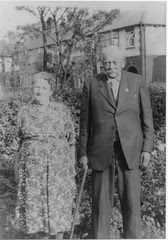 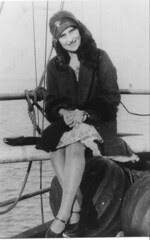 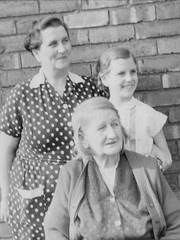 My father, Peter John Ainscough, has passed the following information to me. The source was his mother, my gran, Freda Ainscough, Freda Faulkner (2nd September 1910-1998) married Norbert Ainscough on 31st March 1934.

1.1 Emma Foxley b.c.1878 who married Edward Cook. They lived at Horwich, Lancs. and had four children,
2.1 Harriet;
2.2 May;
2.3 Elizabeth
2.4 Edward who apparently went to Peru at some stage but I have no further information about this.

GRAN'S PARENTS - FAULKNER
Jim Faulkner- On one of the wedding or birth certificates it describes his occupation as a butcher. Freda told us how he was an avid horticulturist and ran 3 allotments adjacent to each other during the war years and up until he was not able to maintain anymore. She also added that they never bought a single fruit or vegetable it was always home grown. My Dad used to visit and remembers picking and eating beans from the garden. Granny Elsie used to have a huge jamming pot in the kitchen and made lots of jam.

CHILDREN
Jim Faulkner had 1 child from his first marriage.
2.1 Nellie Faulkner who married Martin Dwyer (who later in life developed a very hunched back)

and 3 further children from his second marriage to Elsie.
2.2 Ethel Faulkner who married Lesley Waller they had 2 children, Brian and Beryl, they lived at Alderley Edge when my dad Peter knew them.
2.3 Freda (Faulkner b.1910- d.1998) Ainscough m Norbert Ainscough
2.4 Norian Faulkner who married Dennis Foden and had 2 children. Norian and Dennis lived with Gran at 22 Barnabas Avenue and as far as I know stayed there throughout their married life.

It's a remarkable coincidence that Grandad Jim Faulkner (b.26.04.1873) Dad Norbert Ainscough (b. 26.04.1903) and Dennis Foden (b. 26.04.1923) all shared the same birthday with thirty and twenty years respectively separating them. None of them had any genetic link of course!

Gran (Freda Ainscough) was renowned for telling traditional tales, rhymes and colourful stories from her own childhood. One such story was about Freda working at Crewe Hall as a housemaid as a young teenager. She went on to say how she used to sweep the dust under the large rugs instead of disposing in the proper manner. However, she was caught out by the Chief maid and needless to say sacked! Another tale was that of her courting days when she was a very playful and coy young lady. She talked about how she would arrange to meet several young men at the same time at a lampost not far from her home and then watch them from an upstairs room as they turned up. Of course she had no intention of showing her face she just liked playing games in a antagonisingly, provacative manner. She described herself as a beautiful young lady who could have had the pick of her choice but she opted for Norbert 'Funny Face' (my grandad), with a nose that turned up at the end! She always maintained that she didnt love him at the time but would grow to! And that she did. She also said of grandad that "She would trust him anywhere with a woman but not with a pack of cards!" Grandad liked to bet at the White City in Manchester and one pay day he bet the last bit of his money on an outsider- lucky for him it came in!
When Freda was small she used to stay at Granny Parkinsons (my GG gran) who was at the time a widow. Freda shared a bed with Granny Parkinson and sometimes in the middle of the night Freda would wake up hearing Granny P talking to her dead husband in her sleep. Granny P also made it clear that if anything happened to her in the night her shroud could be found in the bottom drawer of the chest- Freda was only about 12 years old!
Gran (Freda) also claimed she had some psychic ability and this scared her a little, she had seen apparitions. Maybe it was because of this she used to try and convince us all that she was a witch......a terrifying prospect as a small grandchild....we really could imagine her flying across the dark skies of Manchester and Cheshire, but we all grew up to realise that she was nothing but a kind and loving gran. I remember her telling us the story about her being "Gypsy Rosie Lee" at a church fayre, reading palms and telling people's fortunes. It was here my auntie Ann first met her when she popped in to see what her future held. Gran told her she would marry a tall, dark gentleman in the near future- youve guessed it - it turned out to be my Uncle Harry (dad's (Peter) brother). Just one of life's many coincidences??
The traditional tales I remember her telling the most was that of the 'Little Pig' and the Farmer's wife.... it starts with her finding a sixpence whilst sweeping out the cottage and off she goes to market to buy a pig....."Pig, pig jump the style or I shan't be home in time to get my husbands supper ready". The other one was 'The little dog under the wagon', she could always tell these tales off by heart.