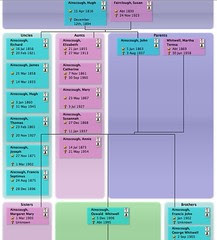 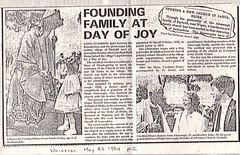 Yesterday proved to be an interesting day, with geneology email information and enquiries flying at me from all directions. Both coincidentally and separately, my father and Mary Ainscough mentioned that “Ainscough” was listed in Burke’s Peerage. That coupled with a query from dad about an Oswald Whitwell Ainscough and the outline of the family lineage from Mary brought the two together……… Mary mentioned that her grandmother’s maiden name had been Whitwell, so there had to be a connection here somewhere! Once again the internet and Google came to the rescue and after visiting just 2 websites I had found all I needed to understand where Oswald fitted into the Mawdesley Ainscough maze of a family tree and possibly Mary too! Then Jonathon (my 2nd cousin) pointed out that Oswald was infact already in our tree…..it was the last place I had thought to look!

And it seems Oswald is linked (all be it by marriage) to Mary Tudor......

The following attempts to illustrate how Oswald is related to our Ainscough branch of the family. Unfortunately Blogger wont allow the use of tabs or tables but Oswald was my 5th cousin 3 times removed.......as Mary Ainscough (see previous blog) says, "Uncle Oswald was my dad's (John) brother. The dates look right to me."
CHILDREN:
5.1 Elizabeth who married Vyner Brookes
5.2 David who is out in Australia.
5.3 Pauline - Toronto
5.4 Kate - Toronto
I remember going to Morars funeral but couldn't tell you the exact date."