ISAAC NEWTON - could there be a link to 16th Century AISCOUGH IN ORMSKIRK?? 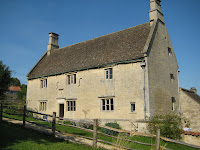 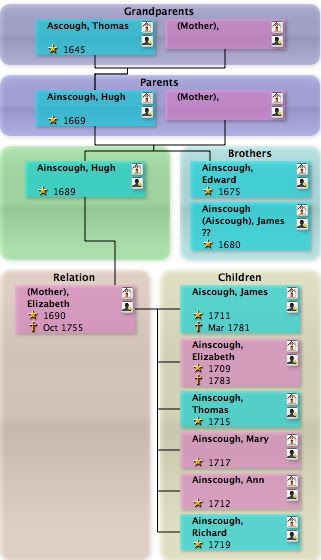 Found under the name of Askew..... James Ascough:, Ju1585 was the grandfather of Isaac Newton, and it is suggested that his father was John Ayscough. Source WIKIPEDIA - See the section of Early life - His mother -
http://en.wikipedia.org/wiki/Hannah_Ayscough/

It does get confusing because one article cites that James was from Market Overton and the other born in Ormskirk! The Ormskirk christenings also lists "Jamis Ascough fi Jo July 1585" which suggests that this James is the son of John ......

Hannah Ayscough (mother of Isaac Newton) was the daughter of Margery Blythe from (Stroxton in Lincolnshire) and Jamis Ascough also born in 1585 (Ormskirk, Lancs). Hannah's parents married in Market Overton in 1609. Her brother, William Ayscough went to Trinity College and became a priest at Burton Coggles.......Hannah had 3 siblings as follows:

And the following list identifies James Ayscoughs (grandfather of Issac Newton) larger family......why was James born in Ormskirk when evidence clearly shows that his family origins were (grandparents) in South Kelsey, Lincolnshire? These were strange times, what with Civil war and persecution of Catholics (which is why they possibly they fled their home in Lincs and headed for the familiar territory of their origins in Lancs. Definitely more research required. May be we have to find out exactly what was going on in 1585 for James to have been born in Lancs and find what age he must have migrated back to Rutland.
Geoff & Heidis Geneology:
http://worldconnect.rootsweb.com/cgi-bin/igm.cgi?op=GET&db=gdtrowbridge&id=I15343/

Of course this has really set me thinking!.....records uncovered so far take our AISCOUGH family as far back as 1645-1620, living in Mawdesley/ Ormskirk. Why were we based there? was this all to do with the Lincolnshire uprising?? could there be connections with Isaac Newtons larger family? Its just beginning to get exciting! If you have any views please get in touch.

ASCOUGH's LIVING IN ORMSKIRK - 16th Century
At the moment I can't easily identify how many separate families were in this Ascough listing? That would be really useful to know......breaking it down by date implies at least 2 families - see 'Jamis July 1585' and 'Richard June 1585' - a biological impossibility from the same family! However, there does seem to be 2 definite groupings 1) 1558-1567 and 2) 1581- 1585 suggesting 2 generations. It might be possible to look at the distribution of these names and work out where the families spread out from......something for a rainy day??

Researched by: Sara L Uckelman
Posted by @boobelle at 8:40 pm