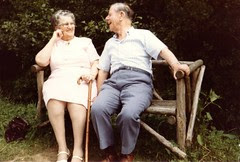 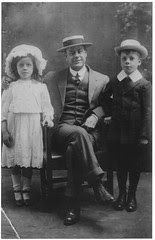 b.26th April 1903 - d19th March 1991, at Swinton Hall Nursing Home, Swinton, Lancs.
My father, Peter John Ainscough, has passed the following information to me. The source was his mother, my gran, Freda Ainscough. Norbert Ainscough married Freda Faulkner on 31st March 1934.
Norbert and Freda were cremated and their ashes laid in Agecroft Cemetery.

Catherine Farley was of Irish origin but at some point they crossed the Irish Sea, probably in search of work, the Farley family growing up in Birkenhead, Liverpool. Catherine (Farley) Ainscough remarried Pop Seymour after Henry died.

Grandad Ainscough was referred to as the "Jelly Tot" grandad by my 2 younger sisters because when they came to stay he would always greet Jane and Rachael with bags of jelly tots! I remember him as a quiet man, incredibly patient and he liked to smoke a pipe. It was difficult for him to get a word in edgeways with Gran around, but he liked it that way. But that isnt how he had always been.....when we were young he was quite strict with us, with a booming disciplinarian voice we had to sit upright at the dining table, no elbows and eat properly, maybe something the children of today could do with learning?? Gran referred to him as her "Funny Face' claiming his nose was stuck up and she reckonned that this was caused by the way he wiped the drip from the end of his nose when he was gardening. I do know that he never learned to drive and so gran and grandad never owned a car, they either walked everywhere or relied on others for a lift. We used to visit them when they lived in a council house, 44 Coniston Rd. Swinton. For many years this house had no indoor toilet, so during the night the choice was either the bucket in the bathroom or a quick dash outside to use the outdoor toilet - I cant believe I had the courage to do this! Many years ago I remember my gran still using an old mangle to do her washing.
My Grandad (Norbert) was a railway clerk throughout his working life, with the exception of the war years. He was borderline for call up to the armed services (age 36 in 1939) and instead was put in the police as a war reserve. One of the advantages of working on the railway was that he got concessionary passes for himself and quarter fares for the rest of the family so they could afford to travel about a bit.
Dad remembers that when he was a lad in Swinton there were trolley buses running from the Town Hall. Peter and his brother Mike used to catch the trolley bus to Manchester and then tram to Hyde, Gee Cross where Catherine Ainscough (Farley) lived. Later after Pop Seymour died and she wasn't well ( dad remembers he was at Hyde with his Dad when she had the first stroke from which she recovered) she moved to live with Uncle Harry and Auntie Helen at Didsbury. He stayed with her once there when Harry and Helen were away for some reason. She died there when he was still at school and he got the news. At the time Peter (dad) was boarding at St, Bedes but left St. Bede's in 1953 and started work at the Pendlebury library soon afterwards.

Andrew Hutton, cousin of Valerie Ainscough, nee Stott, wife of Norbert, would dearly like to contact Valerie or Norbert so that his mother and aunt, Barbara and Sadie, can resume family contact.
The Photos of the Ainscough clan are great!

Hi, please email me at barbaraainscough@mac.com so that I can then pass on your email address or contact no. to Val.