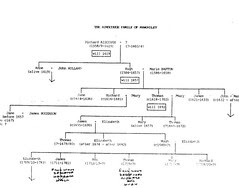 The Ainscough Family of Mawdesley in the Parish of Croston, Lancashire
by Mary Hartley – Treasurer FHS

BRIEF OUTLINE OF OUR FAMILY LINK:

From this tree (1558 Early Ainscough) it looks as though both Richard of 1558 and Hugh of 1584 are in the 16thC Ormskirk christening records.......it says Hugh fi Ric. The dates do fit this time....so we are definitely in the Lancashire area in 1558...just where before this? Bedale??

Mary Hartley writes:
"Lancshire is recognised to be one of the areas of England where the Catholic faith was widely preserved in the 16th and 17th centuries; the long lists of names of the landed gentry in recusant rolls and Papists returns indicate that they occupied over one third of the land. Less is known about the tenant farmers who tended to adopt the same opinions as their landlords.

At least six people known to me through the Catholic FHS descend from a Hugh Ainscough. He, as was required, registered his land in 1717 and signed his name to the document. It is interesting that all six of us were aware of family traditions that “the family had been Catholic for very many years.” The Paris Registers (or Bishops transcripts) for Croston and the nearby town of Ormskirk, survive from 1558. From so early a date it is not easy to reconstitute families with certainty. Fortunately three wills of members of earlier generations survive; RICHARD AISCOUGH (as the name tended to be spelt at that time) made his in 1619; his son Hugh in 1657 and his grandson Thomas in 1692. The name AINSCOUGH, pronounced to rhyme with rain-snow, is capable of seemingly limitless variants; I have standardised to that which Hugh used in his signature of 1717.) These wills, with ancillary evidence from Parish Records, Recusant rolls and Quarter Sessions records enable one to construct a tree of this family of yeoman farmers.

The will of Richard Ainscough in 1619 is especially interesting, for at the end of it there is a lengthy list of ‘Debtes owing’. The first three names are those of ‘gentlemen’ in the area, Richard NELSON, William TRAVERS and Richard ASHTON, owing a total of £240; after them come 24 other names, of people owing sums varying from £30 down to 40 shillings, a total of £160. One cannot be sure that all these were Catholics, but there are a number of known Catholic names. It seems that this ancestor of ours was acting as a local banker, as a side-line to his farming.

Recently, I found corroborative evidence for the history of this 17th Century family. Legal records for the County of Palatine of Lancaster are now at the Public Record Office (Chancery Lane); an account of them was published in the Journal of the Lancashire FHS (1). With the authors help I found a court case, ‘ROGERSON v AINSCOUGH’ in 1681. The bill of complaint, the answers of the defendant and the written evidence of the deponents ( who conveniently give not only their domicile, but also their ages) are extremely long and full of repetitions. The story, briefly is this:
When Hugh Ainscough died in 1657 he left a document leaving his property to be inherited in the male line. He had 3 living sons, Richard, Thomas and John. Some twenty years after Hugh’s death, Richard was a widower with only a daughter, Jane. Dissension arose because Richard’s next brother, Thomas, who had a son James, contended that after Richards death the estate should pass to him and then to James. Unfortunately the original document had (conveniently?) fallen accidentally into the fire when in Richard’s custody and could not be deciphered with certainty. In the end ‘friends and neighbours’ in Croston called the brothers together and endeavoured to settle the matter. Jane had married a tanner, James Rogerson and moved to his home in Grimsargh on the North side of Preston. Richard the widower spent his last years there. On his death-bed (in 1681) he told a visitor from Mawdesley, “I hoped that we had settled everything peaceably, but I fear that after my death my son in law will wrangle”. As indeed he did; the observations from the many deponents from M and nearby townships are of great interest. A lot of the trouble concerned a ‘flagg floor’, which Richard had removed to Grimsargh when he joined his daughter there; this had lessened the value of the Mawdesley farmhouse. Some deponents explained that they were his own flagstones given to him when, on his marriage, he built a cottage in ‘a close of his fathers fields’, so there was no reason why he should not transport the flags to his daughters home.

In the end Thomas retained the ‘estate’ but in 1690 his son James died suddenly, leaving a son and a daughter, both still children. Thomas at once made a will in their favour, but stipulating that ‘should they both happen to die’, the money was to be devoted by trustees to ‘pious purposes’ at their discretion.

Thomas himself died well over 80 years of age, in 1702 and his grandson Hugh, by then of age , signed a bond concerned with administering Thomas’ will. It is this Hugh, father of six children who were all baptised in Croston Parish Church between 1710 and 1720 who is the common ancestor of the six members of our Society.
Of Hugh’s six children, three are easily identifiable in the 1767 Papist Returns. Elizabeth (b15 Feb 1709 - d21 Aug 1783) age 74, had married Henry ANDERTON and emigrated to Yorkshire after the Jacobite rising and in 1767 was a widow in the parish of Holme on Spalding Moor, East Yorkshire, Elizabeth was my 4 x great grandmother.

James and Thomas were both in Mawdesley in 1767 and their full details appear in the Return of the Papists for that year. James’s will (1781) was registered as required for Papists and is in the Lancashire Record Office at Preston. Thomas left no will but his descendants founded the firm of Ainscough, Corn Merchants and built the Catholic Church in Parbold in the 19th Century. Details of this family can be found in ‘Burke’s Landed Gentry’.

I should be glad to hear from anyone with an interest in Mawdesley or in this family."