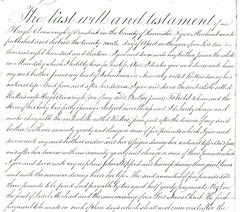 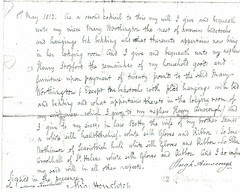 I wish to thank Andrew Scarisbrick (andy_scarisbrick@hotmail.com) who has kindly provided and transcribed the following will detail of Hugh Ainscough. Hugh was the youngest of 3 sons of James Aiscough (1711). His eldest brother John Aiscough (1752) was my GGGGG grandad, so I guess this makes this Hugh a very great uncle of mine!

Andy Scarisbrick also writes, "Oh, and in St Helens church, I found the marriage of Mary Ainscough to Thomas Eccleston. Mary was the sister of Hugh (d.1813), John and James. I have also found the will of Margaret Ainscough of Ormskirk, spinster d.1812. From the info in the will, she is another sister of Mary, Hugh, John and James above. I shall transcribe it and pass that on for you."

d.1813 - The Will of Hugh Ainscough of Ormskirk, liquor merchant

Signed sealed published and declared by the testator as and for his last will and testament in the presence of us who have hereunto subscribed our names as witnesses in his presence and in the presence of each other. The words “one hundred pounds out of the ” which “ to be paid and payable from and divided amongst them after ” payments the payments aforesaid ” being first interlined together with the word “ and “
Mary Fairhurst
Sanford Prescott
Tho: Houghton

Codicil to the above will
Sister Ann Stopford a white silk handkerchief, white silk gloves & ribbon
Sister Mary Eccleston – the like.
The Gig and horse to be sold so soon after my death as conveniently may be.
Witness my hand 27 April 1813
Hugh Ainscough
Witnesses Sanford Prescott
Tho: Houghton


1st May 1813 As a second codicil to this my will I give and bequeath unto my niece Mary Worthington the nest of drawers bedstocks and hangings bed bedding and what thereunto appertains now being in her lodging room And I give and bequeath unto my nephew Henry Stopford the remainder of my household goods and furniture upon payment of twenty pounds to the said Mary Worthington Except the bedstocks with plad hangings with bed and bedding and what appertains thereunto in the lodging room of my said niece which I give to my nephew Henry Ainscough and I give to my sister in law Betty the wife of my brother James a white silk handkerchief, white silk gloves and Ribbon. To Jane Watkinson of Scarisbrick Hall white silk gloves and Ribbon. To Ellen Grooshall of St. Helens white silk gloves and Ribbon And I do confirm my said will in all other respects.
Hugh Ainscough
Signed in the presence of Mary Fairhurst
Tho: Houghton

The tenth day of January 1814 Matthias Smith Executor in this will with two codicils named (power being __?__ to Henry Stopforth & Henry Ainscough executors also named to take upon themselves the execution of the said will when they shall lawfully request the same) as he further made oath that the personal estate & effects of the testator within the diocese of Chester were under the sum of fifteen hundred pounds before me
G Ford Surrogate

The testator died on the tenth day of May 1813