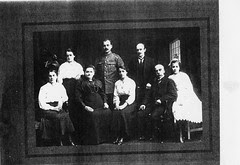 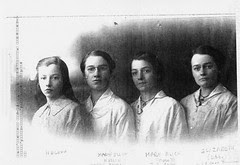 The Potts family feature in my family tree although I know nothing about them, some of my contacts have been able to say where they fit into the overall picture. We now know that Elizabeth married Edward Ainscough (1860-1902), son of my GG uncle Edward (who was brother of Thomas A 1846-1929).
I have also recently found out that Richard Ainscough (b1850- d1928) m Isabella? (1st wife) and Anne Potts (2nd wife). Richard was the brother of Thomas my line. Im not sure if there is a Potts family connection here.......Edward Ainscough grandson of Hugh Ainscough & Ellen (Cowley) married Elizabeth Potts while Richard son of Hugh & Ellen (Cowley) married Anne Potts - are they related?
From the names provided with the photos it appears not, perhaps cousins?

It is also known that James died August 6 1976. Of the three sisters Molly (Mary Ann) died May 28 1966, married Robert Chew who outlived her.
Nobody is sure of what happened to the youngest daughter Helena (Lena), she was last spotted in Southport in the 1940's.
Mary Ellen also married (Harry Chew????) and apparently had at least one son. Elizabeth Potts, Anne Clarks grandmother on her fathers side married Edward Ainscough and as you know had 2 children Winifred (Freda) and Bernard.
Freda also married a Potts, apparently they were second cousins.
A Potts family can be found in the 1901 Census; Elizabeth age 11 (which would match age wise), Robert Potts is listed age 40, occupation painter, Mary age 39, Francis age 17 - apprentice to painting and James 13 - errand boy.
Posted by @boobelle at 5:08 pm