AYSCOUGHS and the PILGRIMAGE OF GRACE 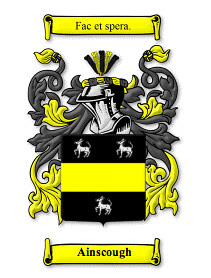 For more info go to:
www.houseofnames.com/xq/asp.fc/qx/ainscough-family-crest.htm/

"The Pilgrimage of Grace was a popular rising by Roman Catholics in Northern England in 1536, in protest against England's break with Rome and the Dissolution of the Monasteries, as well as other specific political, social and economic grievances. Although the Pilgrimage was a specific uprising around York, the term has come to describe a series of rebellions that occurred in the North in late 1536 and early 1537........It began with 'The Lincolnshire Rising' a brief rebellion of Roman Catholics against the establishment of the CofE at St. James Church, Louth, after evensong on October 1, 1536,"

Jonathon Hopper has been trying to find links to the Ainscough history pre 1650 (Hugh & Elizabeth Ainscough - 11th Generation). He was fortunate to make contact with Peter Freeman of Leeds University (aed4p2f@leeds.ac.uk) who has infact been researching some of this also. Peter suggested the following books could be the best source of information for finding out more.......anybody up for some serious reading??

"I've re-searched and found 5 titles which might be useful :

4. The last days of the Lancashire monasteries and the pilgrimage of
grace / by Christopher Haigh. (Manchester : Published for the Chetham
Society by Manchester U.P, 1969)

I've done a quick check through the Dodds' book and found nothing there
relating to the Ayscoughs. Possibly their involvement was peripheral,
or else they were involved in the early stages of the Lincolnshire
rising - in which case they would probably be noted in the Letters
and Papers volumes.

Sorry I can't devote too much time to this, but I hope you find
what you're looking for. It's bound to be out there somewhere.