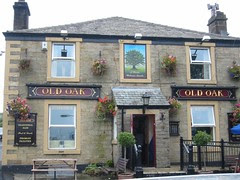 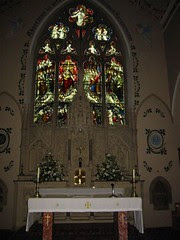 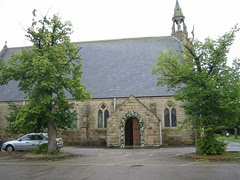 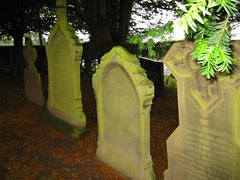 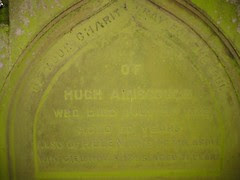 For those of you that are still getting to grips with the family history, Hugh and Ellen are my GGG grandparents. His son Thomas A is my GG granddad, father of Henry A, grandfather of Norbert, Maurice, Bernard, Kathleen, Harry and the others!

Having stopped off in Longridge, Lancs. On the way back from the South Lakes I thought I’d go in search of the pub that Hugh Ainscough had been landlord at in the 1870’s – The Old Oak Inn. It is still there and obviously a popular choice with the locals, although it is bizarrely situated on a mini-roundabout close to Alston, which makes parking quite difficult. After a quick drink and tapping the locals for information about “Grimbledstone farm”, (which is where he had been a farmer for many years prior to being a pub landlord), I headed off down the road towards Alston. “Grimbledstone farm” was just down the road and from there I followed my instinct. I was lucky to spot an RC primary school on the left, with a church next to it and pulled in. After a 15 minute look around there was the headstone I had been looking for! Buried in Our Lady and St Michaels Catholic Church cemetery, Alston - situated between Grimsargh and Longridge near Preston…….not just Hugh but Ellen his wife, Edward and George – 2 of their sons, Margaret, Edward’s wife and Elizabeth daughter of Hugh and Ellen………it was a good feeling and has been a major inspiration to find out more about my ancestors.
If you decide to go and take a look for yourself, it’s on the front row adjacent to the road – left hand side when facing the road.

So Hugh moved away from Mawdesley (place of birth) in 1844 age 22 to Wrightington, Wigan initially, probably to find work as a farmer. Previous family are buried in Mawdesley RC Churchyard.

Census information suggests that in 1882 at the time of Hugh's death, Thomas was working in Chorley with the railways, Edward Ainscough was living in Dilworth near Preston and was the County Railway Porter and that Richard Ainscough of 55 Essex Street Preston in the said County, was Railway Inspector.  This all seems to make sense and was obviously the change in occupation from farming to Railways that the family made. My great grandad Henry, son of Thomas was also a Station Master at Dean Lane Moston and so too was Bernard his son in Southport, Lancashire.....Im sorry to say that it was probably working on the railways that led to Henry's early death in 1912.