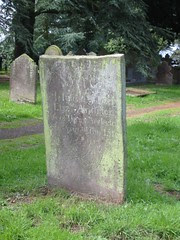 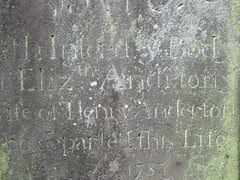 Elizabeth was the eldest sister (1709- 1783) of James Ainscough (1711-1782), Yeoman farmer of Pemberton House Mawdesley and James was my GGGGGG grandad...which makes Elizabeth a very GREAT auntie!

For more info go to: www.eric.percival.dsl.pipex.com/FH%20Website/fam7.html

At some point Henry and Elizabeth decided to move from Mawdesley, Lancashire to Holme on Spalding Moor in East Yorkshire.
Inscription on Elizabeth's headstone reads:
"Lieth Interd y Body of Eliz th Anderton ye Wife of Henry Anderton who departed this Life August 21st 1783"The headstone was a lucky find, only 7 miles up the road from where I live, in the ancient churchyard of All Saints.

ELIZABETH'S PARENTS:
Hugh AINSCOUGH born 1689. A Yeoman Farmer at Mawdesley, Lancs. and 1 spouse Elizabeth. Hugh was in recusant rolls - 1715, 1717
She and Hugh AINSCOUGH had the following 5 children all from the Mawdesley, Croston, Lancashire area:

HENRY & ELLIN BOWLING'S CHILD:
1st wife Ellin BOWLING and Henry ANDERTON had 1 child: William ANDERTON (chr.1730)
Ellin died 3weeks after the birth and William was brought up by his Protestant grandparents in Lancashire.